2018 would be our year. We started by packing our stuff and drive all the way to Mellrichstadt (Germany) to record our anniversary EP, which went really well.

Next, we did our first US tour. Hypnotic Dirge records re-released ‘Into the Arms of Darkness’ as a digipack with bonus song (Lost [In the House of Doom]) and released a split-CD/tape with Eye of Solitude accordingly, containing one of our best tracks so far ‘Darkness’, based on the words of none other than Lord Byron. The tour was a phenomenal experience for us, and we showed the US audience some good old school live shows. They liked it. 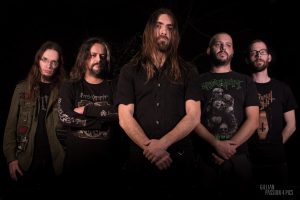 Next on our heavy schedule was the release of our anniversary EP. ‘Death Wish Woman’ was released by Grimm Distribution & Cimmerian Shades recordings on CD and tape. The 3 new songs + cover were received really well. Also the release party, which was our way to celebrate our entire career so far was a blast!
To conclude this tenth year on stage we did some more shows… our first show in Greece, our first appearance on the Dutch Doom Days, and our tenth Darken the Moon festival, with some of the finest bands in the scene.

Right now we are working on new material, to be released on album n° 4… somewhere in a doomed future.