Back from the US of A.

Did we have a good time, out there on the west coast of the US? Oh yeah. It was a fantastic experience for all of us. Most of us never visited the States in the first

place, so it was all a big and new adventure. Next to that we never played this much shows in a row (10 in 11 days). Our previous record was 6 subsequent shows… in 2009! (with the Aussies of The Eternal, awesome times too).
We departed early in the morning of Wednesday March 7th in Brussels, to fly all the way to… Amsterdam. Luckily we got a plane there directly to Seattle! Was also on board of that air plane: Mr Remco Vanhees, drummer of Eye of Solitude (and Faal, and …). Once in Seattle we got ourselves a nice B&B where we could test the stuff we borrowed from the super cool dudes from Usnea to play this doomed tour. After one jet lagged night, the real stuff could start: our first overseas gig with our friends of Eye of Solitude, but also local heroes Bell Witch (awesome dudes!) and Un. This first show of the tour was one of our best experiences ever on stage! What a great, responsive, and enthusiast crowd!!

Not gonna list all the crazy adventures we had on the road to Los Angeles, there’s just too many of them! We did 2 shows in the state of Washington, and as much in Oregon. All other shows were in sunny California, oh great place to be in traffic… jams! Let it be clear that we had the best of times, with special mention to the shows in Portland (hail o mighty Witch Mountain!), Oakland, San Diego, and last but not least Los Angeles. Our touring buddies of Eye of Solitude, with whom we did 25 shows in total, have proven again why we have become so close after all the years and shows we shared. Also a big thank you to our drivers Matty and Filip, hats off dudes!! From Seattle to LA, it’s been a nice drive aye. The haunting forests of Washington, the rural landscapes of Oregon, the we-have-everything of California… beautiful shoreline (101), mountains, forests, larger than life cities, and (too much) Mexican food of course. 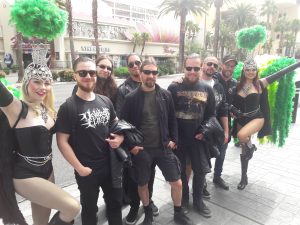 We had one day off, which was ironically on the previous to last day of the tour, in Los Angeles, so we moved our asses to Hollywood for a nice night out there, see some cool places (Lemmy’s Rainbow, Whiskey-a-go-go) and even catch some gigs (Hollywood Roses, great GnR cover band). Curfew of all these crazy places: 2h. We just got into partying and had to go to bed, alas!
After the last show we had 2 days extra to see some stuff. We visited the Hollywood sign. It was damn hot that day but totally worth it to walk for hours in the sun, after days of sitting in a van and waiting in venues to start our show. On our last day we visited Las Vegas, o place of wonders, and ridiculous, larger than life buildings. Cool way to end our adventure on that side of the world, where everything is bigger than in Europe, except the Eiffel Tower and the canals of Venice^^

Back home now, ready to take on other adventures!