Time for a big update on all things Marche Funèbre. Last post on this place was with the release of ‘Into the Arms of Darkness’, around the end of February 2017. Almost 8 months later we are about to launch our next release, but let’s go back first.

Quite some very well attended shows were planned around the release of ITAOD, and all went well (Kleudde, Doom over Gorinchem, Catacombfest). What went even better, were our release shows in Arnhem & Antwerp with the mighty Irish legends of Primordial. Both shows were sold-out, had an amazing atmosphere, we couldn’t have hoped for better release parties. Hails to all involved, and esp. Labrini for fixing the show in Willemeen (Arnhem) and Peter (Het Bos) en Jan (Ondergronds vzw) for the Antwerp show, aka Darken the Moon VII.

After these triumphant shows we had a 6 months break. Some new tunes have been written since. One of them -a 14 minute long EPIC composition- has already been recorded meanwhile. 3 others are scheduled for recording in January 2018. These recordings will both serve a special purpose that will be unfolded when time is ripe. Let’s say that we won’t let our 10th birthday pass unnoticed! 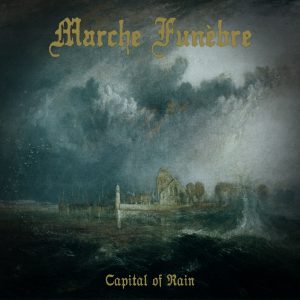 Back to the now. We are amidst a gigging spree that started early September and will bring us over 10 stations in 4 countries to our final gig this year in the infamous Baroeg (Rotterdam) with melodic US doomsters Novembers Doom on December 4th. There will be 2 more editions of our beloved Darken The Moon festivals as well, one with Saturnus (Mechelen, 28-oct), and one with Novembers Doom (Vosselaar, 3-dec).

Accompanied with these performances we will soon release a very limited 10″ split vinyl with our friends of A Thousand Sufferings. Both bands will have one side and present a live song. For us this will be the first live rendition ever of ‘Capital of Rain’, skillfully recorded 2 years ago in Ghent by Johan (Neege Duust recs).

Oh, and soon we expect to bring you some first actual news about our anniversary plans. Stay doomed!

The March is coming… with the sound of DOOM!